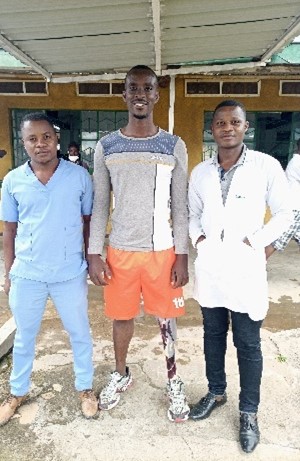 Fulgence is a 32 year old man, who lives 30 minutes from Gatagara, but comes from Ruhango district, where all his family still resides.
He works at HVP Gatagara as a lab technician and plays on Rwanda's national volleyball team for the Paralympics. He also participated in the London Paralympics in 2012.
Fulgence lost his leg during the 1994 Rwandan genocide when he was still just a child. He was rescued by his mother, who lifted him from the hands of his assailants and escaped, managing to stop the blood spilling copiously from his leg. Unfortunately, the injury was not treated well at the hospital and there was nothing to do but amputate Fulgence's left leg below the knee.
Since 1998, Fulgence has used several prostheses, but he's happy to be able to use his new Monolimb, as it's much lighter than the ones he's used so far.
<< Back