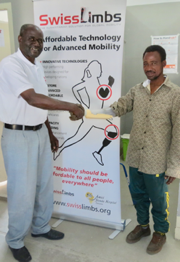 Chesco is married and has 4 children from the ages of 3 to 13. He tells us his story with a smile on his face, because of what will be in his life, rather than what it has been.
“I was working as an operator of an excavation truck for a local company. Each day they would transport us to the work site on the back of the company lorry. One morning our driver hit a diesel carrier. Of the 65 people involved in the accident, 6 died. Some had more minor injuries but I lost my right arm above the elbow.
Staff of my employers took me to the KCMC (the Kilimanjaro Christian Medical Centre) to be fitted shoulders causing me constant pain for the time I had it on. After 5 years it became worn out so I stopped using it and never sought a replacement prosthetic."

On 21st September 2018 Chesco was fitted and trained with the myoelectric hand. He was in awe of its functionality and smiled constantly as he practised using it. At his own insistence he left the workshop carrying his bag in his right hand. His next step towards restoring the life he once had is to return to his boss and ask for his old job back as excavation truck driver.
<< Back