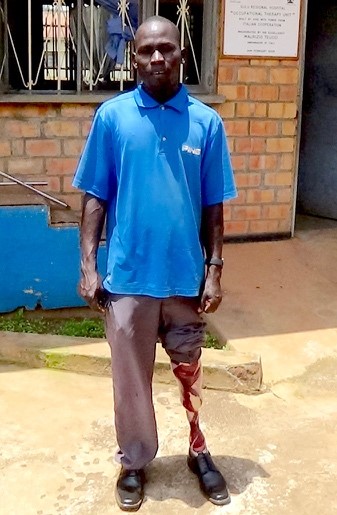 John is a 30 years old plumber but also a Boda Boda driver in between jobs to supplement his income. Boda Boda drivers are taxis on motorbikes, they are the main mean for transportation in Ugandan society. They are licensed for 1 passenger but are often found with 2, 3 even 4 passengers.
John arrived at the hospital after a half day travel on his motorbike. He came from another district but the distance did not bother him, he was just so excited to get a new leg. His wife Alice stayed home with their 2 children, a 4 years old boy and a 2 years old girl.

"I was walking around our home courtyard when I stepped on something strange and when I tried to check what it was - boom! It exploded! I immediately lost consciousness and woke up hours later at the hospital. I was told that it was my father who came to pick me up and put me on his bicycle and rode a long distance to take me to the nearest medical center.

I regained my consciousness and the immediate reaction was to get out of bed, but I felt that my left leg was just too light, I looked down on it and saw what was missing and suddenly I started feeling a lot of pain. I started crying for the pain but also because I realized I could not walk anymore. After 2 months at the hospital I was sent home with a pair of crutches. The kids in school were teasing me because of my missing limb.

2 years later I was found by an AVSI worker who told me that I could get an artificial leg brought me to the Gulu Regional Referral hospital. I was so happy, I could walk again!

Now I have received a brand new Swissleg! It’s so much nicer then the previous one, and especially it’s so light that makes everything so much easier: walking, riding my bike and working. I could even choose my favourite decoration, and I think it looks great. I want to thank SwissLimbs and AVSI for giving me this wonderful gift.”
<< Back