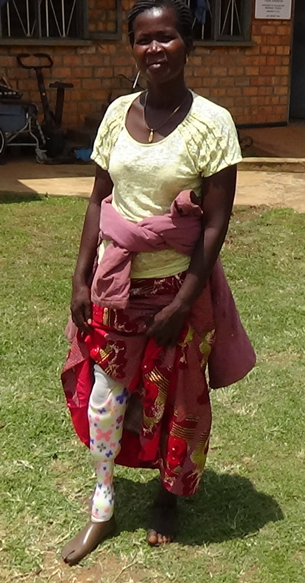 Lily is a Ugandan woman with four children: a girl aged 28, a boy aged 25, a boy aged 14 and a girl aged 3 (from her second husband who is now deceased). She is also the grandmother of a 5-year-old grandson.

"As I was returning to my house from the fields, the LRA (Lord’s Resistance Army) were all over my village and made themselves at home in my yard. The UPDF (Uganda People’s Defence Force) soldiers were approaching and forced the LRA to retreat into the bush, while they were fleeing, they planted landmines everywhere.

I was last of the 6 women on the way home after a day’s work in the fields. It was already dark an as I stepped on a landmine, I heard a noise, and then the blast. My 5 friends fled in fear and left me laying there, bleeding, fully conscious and in terrible pain. I battled death all night long, until they came to rescue me in the morning.

The Red Cross ambulance took me to the Gulu Regional Referral Hospital where I finally let go and lost my consciousness. When I woke up I realized my leg was cut off and the immediate thought was: How will I now work to feed my children? Without a leg, I cannot live!

But after I was fitted with a prosthetic leg, I slowly started to walk again and managed to put my life back together and work again. I am land mine survivor, I have been abandoned by my first husband, I am a widow from my second, but I am grateful to God that I am alive and could take care of my 4 children.

When I received the new Swissleg I couldn’t believe how light it was. I walk so much easier with it, especially because I must walk long distances, it is less tiring".
<< Back