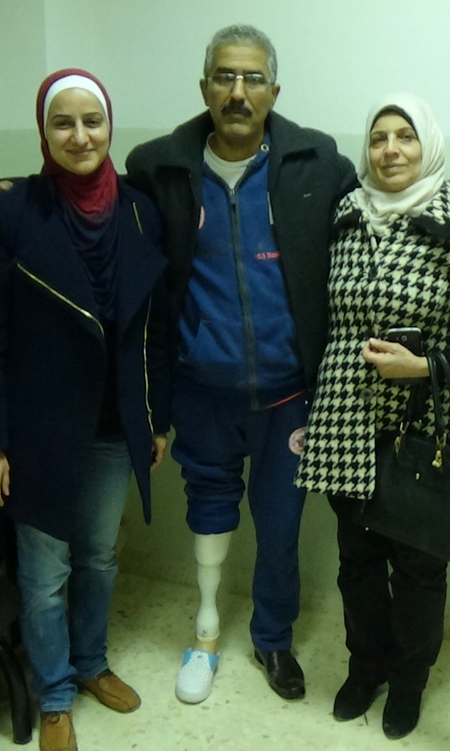 Mohammad Nhaier lives in Irbid since 2013 under assistance. Back in Syria he was the headmaster of a school, his wife Adiba was a teacher under the Ministry of Education. They have 6 children, 4 of which now adults with degrees and professional training are now doing manual jobs to survive here in Jordan.
"The streets of Raqqa were full of people going home after work. Me too, I was walking home when the rockets suddenly hit. People were running and shouting, 20 people were severely injured and 6 died. I saw something that I will never forget: as a building was collapsing a lady was shot out of the balcony of her flat, free falling to her death. I found myself 100m away, so strong was the explosion.
We were rushed to the emergency room of the hospital only to find it completely deserted. All medical personnel fled in fear of the Isis fighters who just invaded the city and made themselves the new rulers.

There was no other option but to return home and mend our own injuries. My body was covered with metal splints, especially my leg, which even with the best efforts I could not treat appropriately. I desperately needed medical attention and I started to plead for permission from the Isis new rulers to go to Damascus hospital. 4 months later I received it, but it was too late to save my leg and the doctors could do nothing else but to cut it off. I was angry, I have no way to describe my feelings at senseless behaviour from those people.

In Damascus, the situation got worse and they took us as refugees to the Zaatari camp. I cannot describe the conditions there were terrible back in 2013. It was cold, unorganised, we were sharing a tent and food was scarce. It was unbearable, so we saw a gap and escaped to the nearby city of Irbid where we live to this day.

I suffered so much, a suffering that I wish not even to my worst enemy. 14 surgeries later, and over 3 years after that fateful day I finally received my first leg. I don’t know how to express my thanks to SwissLimbs and to their donors for such kindness. I can walk again, and this is a miracle.

I don’t have too many hopes for my future, it is too painful to see the devastation of my Country and the scattering of my family.”

SwissLimbs gave him a first prosthesis on February 4th, 2017
<< Back